‘Today’s hike will be the last’: Economists say Bank of Canada to put interest rates on pause

The Bank of Canada raised its benchmark interest rate by 25 basis points to 4.5 per cent, the highest it’s been since 2007.

This is the central bank’s eighth consecutive increase in an unprecedented cycle of hiking that began last March when the lending rate stood at 0.25 per cent. Governor Tiff Macklem has been raising rates to rein in decades-high inflation that far-outpaced the bank’s target of two per cent.

Sign up to receive the daily top stories from the Financial Post, a division of Postmedia Network Inc.

Thanks for signing up!

A welcome email is on its way. If you don’t see it, please check your junk folder.

The next issue of Financial Post Top Stories will soon be in your inbox.

We encountered an issue signing you up. Please try again

In commentaries on the Bank of Canada’s latest move, most economists said they believe the bank has likely hit the pause button on this cycle of rate increases.

Here is what they have to say about where rates will go from here.

The bank delivered 25 basis points as expected, and is once again leading the way among global central banks as it’s the first to signal a pause. The shift was a bit more dovish than anticipated, driving Government of Canada bond yields lower and putting the Canadian dollar on the defensive. While policymakers haven’t shut the door on more hikes, the bar for further tightening is quite high. It looks like a March move is off the table barring some wild data. The April policy decision will be more definitive as we’ll have a few employment and CPI (consumer price index) reports by then. BMO’s base case remains that the BoC is on hold through the rest of 2023.

The key message in today’s decision is that the central bank expects interest rates to remain on hold for some time. However, it clearly states that it remains ready to hike again, if inflation does not ease as expected, continuing to show a strong commitment to restoring price stability. This suggests the BoC could hike later this year if underlying inflationary pressures prove stickier. However, we note that, at this point, the likelihood of further rate hikes is low.

Today’s decision supports our view that the BoC is likely done with its tightening. As such, we believe that interest rates will stay on hold until at least the end of 2023, as we believe that inflation has likely peaked.

The Bank of Canada accompanied its smaller 25-basis-point hike with new guidance that it intends to hold the policy rate at the current 4.5 per cent while it assesses the impact of the cumulative interest rate increases so far. While the bank did not rule out future rate hikes entirely, the new guidance reinforces our view that the bank’s next move is likely to be a rate cut, albeit not until later this year.

We continue to (believe) that the bank is underestimating how quickly core (inflation) prices will decline, with our forecasts still pointing to a drop in headline inflation to two per cent by the second half of this year. The upshot is that we remain confident that today’s hike will be the last and we see scope for the bank to start cutting interest rates again as soon as the third quarter. 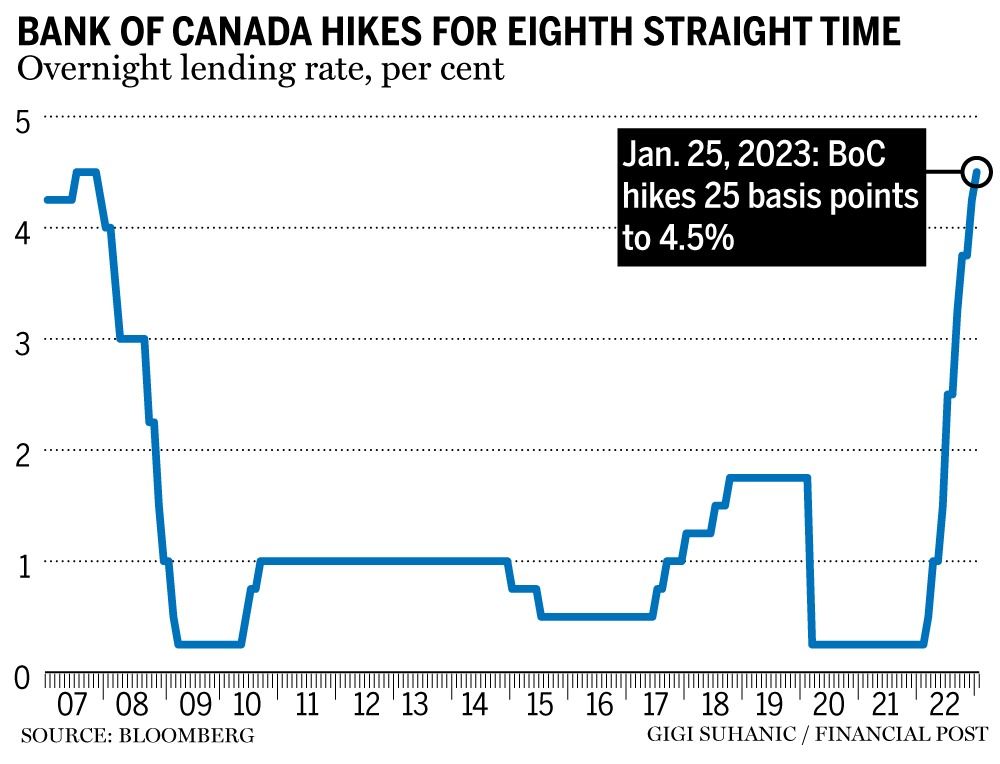 The Bank of Canada hiked rates by a further 25 basis points today, but provided some unexpected guidance that this may be the peak for the current cycle. The 25-basis-point increase, taking the overnight rate to 4.5 per cent, was well anticipated by the consensus. The bank pointed to stronger than expected growth at the end of 2022, a tight labour market and still elevated short-term inflation expectations as reasons for the policy move today. However, the statement also pointed to an easing in the three-month rates of core inflation, and the expectation that overall inflation will come down “significantly” this year due to the energy prices, improvements in supply chains and the lagged effects of higher interest rates.

Possibly because of greater confidence that inflation is easing, the bank changed its guidance to state that if the economy evolves as it expects then the policy rate will be kept on hold at its current level, although the statement also warned that the bank was willing to raise rates further if needed. The MPR (Monetary Policy Report) projections for GDP growth are set at one per cent this year and 1.8 per cent in 2024, which is little changed relative to October but a bit higher than our own forecasts. Because of that, we suspect that the economy will indeed evolve inline or even a little weaker than the bank suspects, and that today’s hike in interest rates will indeed mark the final one of this cycle.

With inflation still running very hot, governor (Tiff) Macklem confirmed that the central bank is more concerned about upside than downside risks to inflation. The pause in interest rate increases is conditional on the outlook evolving as expected and inflation pressures continuing to ease. Still, our GDP forecasts are slightly weaker than the BoC’s projections — we expect a ‘moderate’ recession and higher unemployment this year — so we don’t expect they’ll need to restart. Odds are that this was the last interest rate increase of this hiking cycle and we look for the BoC to now leave the overnight rate at the current 4.5 per cent level for the rest of this year.

The BoC’s first meeting of 2023 looks to be the last in which it will raise its policy rate. Heading into today, the bank had communicated that it could go either way with today’s decision — deciding between a final hike or a pause. Given the robustness of consumer spending and employment trends, the BoC clearly felt it needed this final hike to solidify the turn in economic momentum.

Looking at the bank’s forecast, the economy is set for a consumer led slowdown, with GDP likely to “stall through the middle of 2023.” Greater conviction in this has also led the BoC to cut its inflation forecast. With the belief that the economy is on the path to price stability, the BoC can now step to the sidelines and let its restrictive policy filter through the economy. Though it does have the option to hike again should inflation prove unco-operative, we are expecting it to hold rates at this level for most of 2023, before cutting at the end of the year to drive a better balance between interest rates being too far in restrictive territory and a weakening economy.

As expected, the Bank of Canada raised interest rates by 25 basis points. This met our and the markets’ expectations including the fact that (the Bank of Canada) formally announced a pause. What happens next will depend on how inflation trends going forward. While they could be forced to hike further should inflation not continue to move towards their two per cent target, we do not expect them to cut anytime soon.

Raising rates is a blunt tool with long lags in terms of the impact to the real economy. Recent job numbers have been very strong but there are now signs that the increase in rates is slowing economic activity. The markets may have gotten ahead of themselves by anticipating a potential rate cut in 2023. We don’t expect the BoC to declare victory until they achieve their goals.

Denial of responsibility! NewsAzi is an automatic aggregator around the global media. All the content are available free on Internet. We have just arranged it in one platform for educational purpose only. In each content, the hyperlink to the primary source is specified. All trademarks belong to their rightful owners, all materials to their authors. If you are the owner of the content and do not want us to publish your materials on our website, please contact us by email – [email protected]. The content will be deleted within 24 hours.
AziNewsBankBest NewsBusinessbusiness newsCanadaEconomistsHike
Share

McIlroy says Reed is ‘not living in reality’

The Last of Us Reimagined As Mario Kart Featuring Pedro…

Aakash Chopra takes a dig at Cricket Australia over ’36 all…

Retrospective of Kerala artist KP Reji takes a look at his…

The 12 Fastest Ways To Travel On Land – SlashGear

12 Bizarre Phones From The 2000s You May Not Remember…