When campaigner Dan Neidle started writing about the tax affairs of Nadhim Zahawi, he received an email from the Tory MP’s lawyers.

Not only did law firm Osborne Clarke advise him to retract his statements and instruct his own libel lawyers, but the email itself was marked “confidential” and Neidle was informed that publishing it would be “a serious matter”.

Months later, what started as a tax probe has become a case study in the kind of tactics used by lawyers that are now firmly in the regulator’s crosshairs.

This week the Solicitors Regulation Authority warned the profession against wrongly marking letters as confidential or “without prejudice”, language intended to shield the contents from any future court proceedings and only meant to be used when the sender is trying to settle a dispute.

As part of a crackdown on so-called “Slapps”, strategic lawsuits against public participation, the SRA said it believed lawyers were pursuing “abusive litigation” designed to “harass or intimidate” their opponents into silence.

It set out a list of behaviour that could result in disciplinary measures. And it said it would take action if it found lawyers sending threatening letters advancing meritless claims or pursuing litigation that was “bound to fail”.

The regulator has 29 probes underway based on complaints and tip-offs, and warned lawyers on Monday that “representing your client’s interests does not override wider public interest obligations and duties to the courts”.

In a formal complaint following the SRA’s guidance, Neidle said Osborne Clarke wrongly marked its correspondence as confidential and “without prejudice”, even though it was not trying to reach a settlement.

He also alleged that the firm had no real intention of commencing litigation, and was “bluffing”. Neidle, a former senior tax lawyer, said he had a strong public interest defence in what he published.

“I thought [Osborne Clarke’s] behaviour was outrageous,” Neidle said. “I didn’t set up [think-tank] Tax Policy Associates to campaign on libel law, but I felt I’d blundered into something that was so wrong I should have a go at helping to fix it.”

Osborne Clarke did not provide a comment for publication. 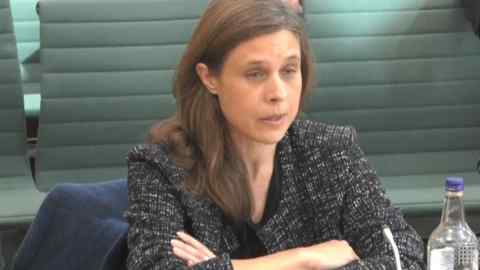 “In the old days,” Stephens added, “firms like Carter Ruck used to send you a writ with the letter before claim, so there was a [genuine] threat”.

Paul Philip, SRA chief executive, said on Monday: “The right for clients to bring legitimate claims and for solicitors to act fearlessly in their interest is important. Yet representing your client’s interests does not override public interest obligations, so when solicitors cross the line into Slapps, we will take action.”

Richard Moorhead, a professor of law and professional ethics at the University of Exeter, said the guidance was “a good start and tackles some of the most egregious conduct, but there is a lot of wiggle room for claimant lawyers, and only through vigorous enforcement of the regime will the regulator have an impact”.

The regulator’s warning follows months of debate about reforms to England’s laws to prevent so-called “lawfare” by oligarchs and powerful elites.

The government set out plans to control the cost of libel lawsuits and reform other aspects of media law in proposed anti-Slapp measures in July, following a consultation into potential solutions.

Options put forward include creating a process allowing judges to throw out spurious claims at an earlier stage in legal proceedings, and a costs protection regime.

Anti-Slapp laws already exist in most US states and Brussels is considering its own measures for the EU. Stephens said the UK “desperately” needed reform.

But some lawyers have warned that the debate risks tarring genuine libel cases with the same brush as meritless ones, and argue that the current proposals and definitions are too widely drawn.

“People are entitled to take steps to protect their reputation if they have been defamed. The various one-size-fits-all anti-Slapp ‘fixes’ being proposed are unworkable,” he said.

He added the plans “seek to bottle amorphous concepts in a rudimentary manner and, in doing so, create a real risk of preventing access to justice for those with genuine claims”.

Giving evidence to MPs on the human rights implications of Slapps in November, barrister Sara Mansoori also said that it was “dangerous” to draw the definition of a Slapp too widely.

The law needed to “find the balance” between “preventing illegitimate abusive actions but still allowing access to justice for those individuals with genuine claims”, she said.

Denial of responsibility! NewsAzi is an automatic aggregator around the global media. All the content are available free on Internet. We have just arranged it in one platform for educational purpose only. In each content, the hyperlink to the primary source is specified. All trademarks belong to their rightful owners, all materials to their authors. If you are the owner of the content and do not want us to publish your materials on our website, please contact us by email – [email protected]. The content will be deleted within 24 hours.
AziNewsBest NewsBusinessbusiness newsFirmsLatest UpdatelawLive News
Share

Why Bother Bringing Back the Dodo?

Millennial Money: 6 ways to move out of your parents’ house

Upcoming Indie Games We Can’t Wait To Play In 2023…