Sunbreak, the massive expansion to Monster Hunter Rise, is just over a month away, and there’s so much more to learn about what kinds of monsters and locations to expect as our hunters move from Kamura Village to their new base of operations in Elgado Outpost. Today, Capcom held a digital event covering plenty of new content coming to the big DLC release.

The event began with a new story trailer, focusing on the cover monster Malzeno, who, with a horde of tiny vampiric monsters, drains life from the environment and captures other creatures. Malzeno has a history of devastating the kingdom of Sunbreak’s new character Fiorayne and will continue to be a problem for hunters in this expansion. It can inflict a new Bloodblight status which drains health and forces the blighted hunter into “a battle of life force” where damaging the elder dragon will recover that player’s lost vitality. If Malzeno absorbs enough of a hunter’s essence, it will transform into an even more terrifying form.

As for other monsters announced for Sunbreak, Seregios, the flagship monster from Monster Hunter 4 Ultimate, returns to divebomb unsuspecting hunters with its bladed legs. Also announced are two subspecies of existing Rise creatures with the icy Aurora Somnacanth and the molten Magma Alumudron, both of which look like fun variations on the existing monsters. On top of these new subspecies and returning favorites, other existing monsters from Monster Hunter Rise will have more powerful versions in the Master Rank quests, some with new moves and abilities to spice up fights.

To combat these new threats, Hunters are also getting a significant upgrade to their arsenal of attacks. Switch Skill Swap is a new ability that lets players change between two loadouts of Switch Skills on the fly. This allows hunters to use up to four customizable Silkbind moves in conjunction with each other and combo the moves together in creative ways. To make sure a player isn’t vulnerable while swapping skills, a new Swap Evade can be used to slip out of the way of an attack while changing Switch Skill loadouts. Other quality of life improvements were shown off, such as the ability to run up walls without the use of a Wirebug, as well as the option to keep attacking a monster when it’s in a mountable state. 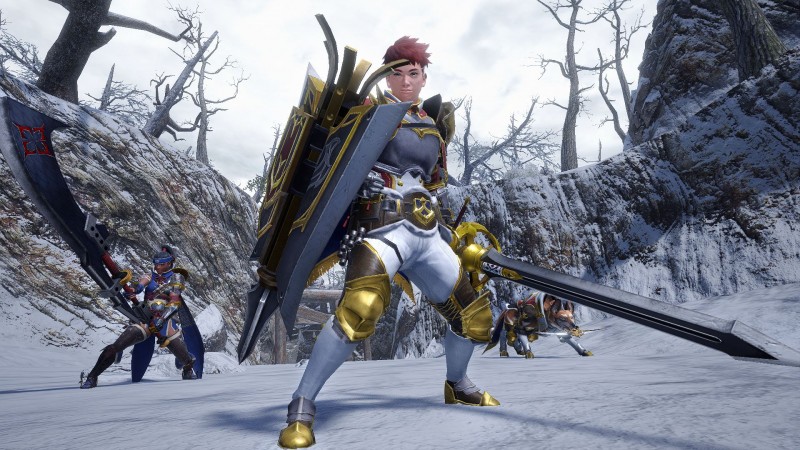 Follower Quests allow you to take NPCs along with you on single-player adventures with your favorite characters from Sunbreak and vanilla Rise. Each Follower has their own weapons specializations and are supposed to be quite helpful in battle. From Elgado Outpost, a whole slew of characters are available to join you on Follower Quests, including Fiorayne, Luchika, Jae, Admiral Galleus, and Master Arlow. From Kamura Village, the twins Hinoa and Minoto can join in on these quests.

The presentation concluded with a few more minor announcements. A Nintendo Switch Pro Controller was revealed with an image of Malzeno etched on the face of the device. Those who have a save file for Monster Hunter Stories 2 will recieve a Palico layered armor set to make your cat friend look like Navirou. And finally, free content will be released following the launch of Sunbreak. Like other Monster Hunter titles in recent years, expect new monsters and armor to become available in these updates.

Denial of responsibility! NewsAzi is an automatic aggregator around the global media. All the content are available free on Internet. We have just arranged it in one platform for educational purpose only. In each content, the hyperlink to the primary source is specified. All trademarks belong to their rightful owners, all materials to their authors. If you are the owner of the content and do not want us to publish your materials on our website, please contact us by email – [email protected]. The content will be deleted within 24 hours.
AnnouncesBest NewscombatDigitaleventFreedomHunterhunters
Share

Nvidia Hints at Revenue Drop in Q2 2022 Amid Weak Gaming…

UK braces for even higher bills as Norway threatens…

Lady Gaga confirms she is playing Harley Quinn in Joker…

Domestic Car Sales Have Gone Through A Steep Decline Since…

RAGBRAI: Riding a bike across Iowa isn’t for the sane.…