According to a report by Bloomberg’s Mark Gurman, Apple is planning to release a VR/AR headset named the “Apple Reality Pro.” The device’s announcement is expected to take place at WWDC, with a potential launch in the US at a price point of $3,000 later this year. The development of the Reality Pro, which is the result of a seven-year project and the efforts of over 1,000 members of Apple’s Technology Development Group, represents Apple’s first new product category since the launch of the Apple Watch in 2015. The company is taking a significant financial risk on the device’s success.

Here are the top 5 features of this device, as detailed by Mark Gurman!

The Apple Reality Pro will reportedly be constructed of aluminium, glass, and cushions and have a design similar to the AirPods Max, according to Mark Gurman’s report. It will feature a curved front screen that displays content to the wearer’s eyes, speakers on the sides, and a headband for a secure fit on the head. The device is said to utilize a modified version of Apple’s M2 processor and has a battery pack that connects to the headset via cable, which the user will carry in their pocket. The battery is reportedly the size of two iPhone 14 Pro Max batteries stacked together and will provide up to 2 hours of battery life.

The Apple Reality Pro will be equipped with external cameras to track the user’s hands and sensors inside to monitor their eyes. This capability will allow the headset to detect where the user is looking and enable them to interact with the 3D interface, similar to an iPhone, by using gestures such as pinching with the thumb and index finger. This feature eliminates the need for physical hand controllers commonly used in other VR/AR headsets.

The Apple Reality Pro will feature a Digital Crown, similar to the one found on the Apple Watch, that allows the user to switch between VR and AR modes. According to Mark Gurman, when transitioning from VR to AR, the fully-immersive environment will gradually fade, revealing the user’s actual surroundings. Gurman reports that Apple views this feature as a major selling point of the Reality Pro. 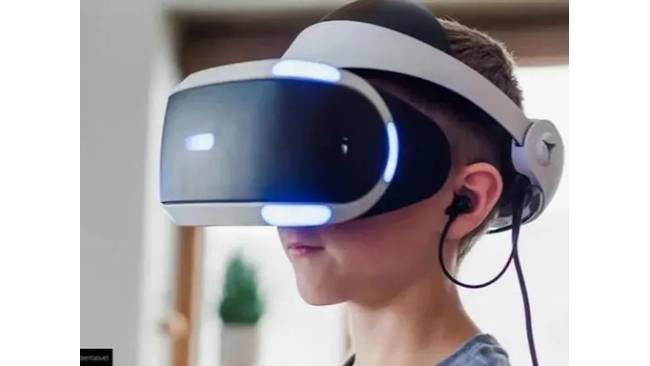 The Apple Reality Pro will have the ability to create a realistic rendering of a person’s face and entire body in a virtual environment, allowing for a more natural and lifelike conversation experience compared to other VR platforms, such as Meta’s cartoon-like rendering. However, due to the high processing power requirements, when conducting a FaceTime call with more than two people, the Reality Pro will display all users as Memoji.

The Apple Reality Pro can be used as an external monitor for a Mac, allowing users to view the display in VR while still utilizing the computer’s touchpad, mouse, or physical keyboard for input.

The Apple Reality Pro will enable users to experience watching a movie on a large theatre screen in a fully simulated environment such as space or a desert. However, to fully enjoy the Spatial Audio feature, the user will need to wear AirPods while using the Reality Pro.

Denial of responsibility! NewsAzi is an automatic aggregator around the global media. All the content are available free on Internet. We have just arranged it in one platform for educational purpose only. In each content, the hyperlink to the primary source is specified. All trademarks belong to their rightful owners, all materials to their authors. If you are the owner of the content and do not want us to publish your materials on our website, please contact us by email – [email protected]. The content will be deleted within 24 hours.
Appleapple arApple Reality ProApple VRBest NewsdetailedDigitfeatures
Share

HP’s Elite Dragonfly Chromebook Is Superb but Too…

The Last of Us Reimagined As Mario Kart Featuring Pedro…

The 12 Fastest Ways To Travel On Land – SlashGear

12 Bizarre Phones From The 2000s You May Not Remember…